Pitching in for cricket in Tingha

TINGHA’S cricketers will usher in a new cricket season with a new artificial turf pitch and revamped practice nets, thanks to a newly completed upgrade unveiled this week.

Cr Harmon says the project kick starts a flurry of improvements to unfold at Tingha, which will include installation of new grandstand seating at the rugby league ground and barbecue facilities added to Grahame Park.

With July marking 12 months since Tingha and surrounding areas transitioned to Inverell Shire, the mayor says he’s proud of the work Council has achieved in year one.

“Thanks to the Australian Government’s drought recovery funding, we have updated the cricket facilities ahead of next cricket season, Wing Hing Long Museum has received upgraded roofing and wiring and works such as the renewal of the bridge on Red Hill Road are also shortly to unfold”.

Mr Livermore says the project at the cricket ground marks the delivery of a promise made 12 months ago when Council, the Tingha Recreation Reserve committee and the cricket club discussed potential improvements.

“We had a discussion with Council a year ago about getting the cricket ground sorted. Having the two cricket practice nets back in action is just a bonus and will hopefully get young ones involved”.

Cr Harmon commended Tingha Recreation Reserve’s volunteers for their involvement on the ground.

“Ivan and his committee have been tremendous with clearing the site, preparing the practice nets ahead of the new synthetic turf and helping to coordinate the project.

With the cricket practice nets available year-round and also located alongside Tingha Public School, Mr Coleman says he hopes to see increased use as summer approaches and the likes of Big Bash cricket ignites the enthusiasm of youngsters. 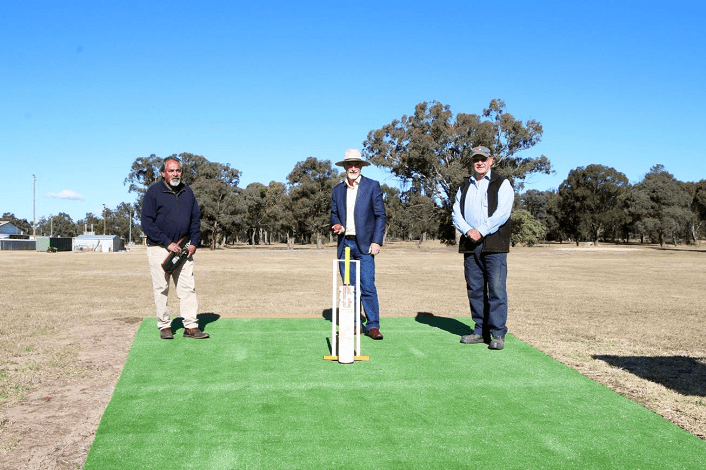