The $5.7 million upgrade of Copeton Dam Northern Foreshores will reach full speed shortly, with a number of construction works to commence within the next fortnight.

“This week, we have seen the arrival of the new kiosk and caretaker’s residence, which is the first in a series of new buildings”.

“Next week sees the construction start on the viewing platforms, which will be dotted throughout the reserve offering terrific views of the dam and an ideal spot for a barbecue”.

“We also have the builders commencing next week on the communal kitchen, which will include an indoor dining area for at least 100 guests”.

Cr Harmon says a feature of the project has been the involvement of local tradespeople and suppliers, with Council focusing on spending dollars in the Shire.

While works progress, Cr Harmon says the Northern Foreshores will remain open for day trips only, with the reserve to be closed for a full day on Friday 2 October while the amenities block construction takes place.

The Auburn Vale Road side of the dam will be open for the long weekend, however, only for day visitors, as the public amenities will not be available.

“The new amenities block will tick a lot of boxes for those who visit the dam – the community survey conducted during the project design phase showed more than 60 per cent of visitors ranked it as a priority”.

The mayor indicated further works to commence in the coming months include walking paths, widening of the access road into the reserve and new playground areas.

“It’s certainly a very exciting project for the shire and one that will also bring a lot of visitor dollars to our local economy long term”.

“I thank the community for their cooperation and patience while construction activity is undertaken”.

The redevelopment works are expected to be completed mid 2021. 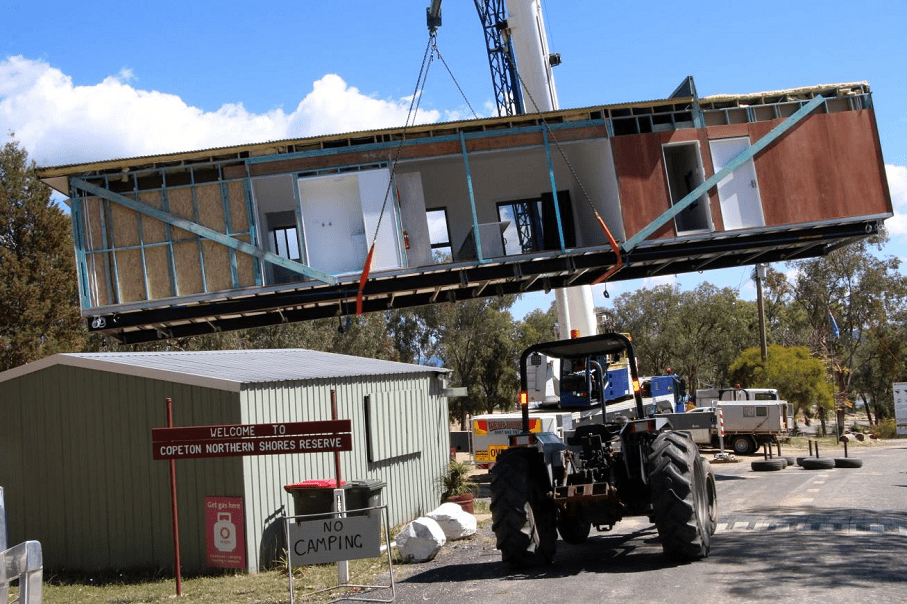 Image: The new kiosk and caretaker’s residence was lifted into position earlier this week.