perm_phone_msgContact Us
account_balanceCouncil Meetings
local_libraryPublic Library
descriptionFind a Form
view_carouselHave Your Say
paymentOnline Payments
CORONAVIRUS (COVID-19) – Vital information on the virus can be found on the Australian Government Department of Health website. Click here.
QLD BORDER RESTRICITIONS IN FORCE – Restricted entry to Queensland started at 12.01am Thursday, 26 March 2020. Click for more info.
BYRON STREET RENEWAL: Stay up to date with the Byron Street Renewal works. Click for more info.
BLUE-GREEN ALGAE RED ALERT: WaterNSW has issued a Red Alert for Blue-Green Algae for parts of Copeton and Pindari Dam. Click for more info.
WATER CONSERVATION TIP: Empty water bottles onto the garden or pot plants instead of down the sink. Click for more info.
Listen

LOCAL waterways have received an injection of native fish stock, with Council and Inverell RSM Fishing Club joining forces to release over 4,500 fingerlings over the weekend.

The three month old Murray Cod fingerlings arrived direct from the hatchery and deputy mayor Anthony Michael was on hand at Lake Inverell to assist the fishing club with the release.

“It’s incredible to see the season improve and wonderful to have a flow back in the Macintyre, which is ideal for the fingerling release”.

Cr Michael says the restocking also counteracts the loss of fish experienced during the drought.

“The RSM Fishing Club has been long-term supporters of native fish restocking and Council is pleased to be able to pool our funds with theirs and see a large-scale fish release. The NSW Government has also matched our $6,000 contribution dollar-fordollar under their Native Fish Restocking Program”.

“Our recent Kingfisher Copeton Invitational fishing tournament which we run every February helps the club raise the funds to do fish restocking”.

“We will be releasing at ten public fishing sites today, including locations at Lake Inverell, along the Macintyre and also sites around Ashford”.

Mr Black added the club and council also plan to release Golden Perch fingerlings in May this year.

For Narrabri Fish Farm owners Rick and Sharmaine Cunningham, who supplied the fish, and were on hand for the release, the season has been a rollercoaster.

Now in their ninth year of business, Mrs Cunningham says despite a dire start to the season, recent rain has transformed it to their best year yet.

“Since Christmas, it’s the busiest we’ve ever been. After it started raining, we have had so many orders I can’t believe it”.

Mr Black says the quality of fish coming out of the Narrabri Fish Farm is excellent and he’s hopeful of strong survival rates.

At just five centimetres in length, birds and pelicans in particular are major predators for the newly released fingerlings, which are Australia’s largest freshwater fish species, growing to over one metre in length. 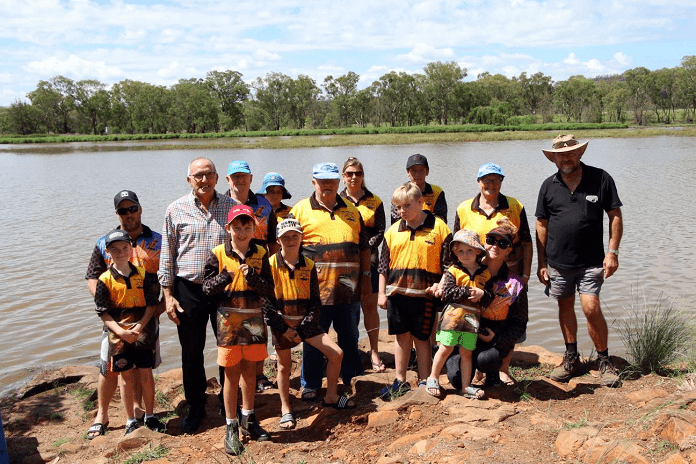