perm_phone_msgContact Us
account_balanceCouncil Meetings
local_libraryPublic Library
descriptionFind a Form
view_carouselHave Your Say
paymentOnline Payments
BLUE-GREEN ALGAE – RED ALERT: WaterNSW has issued a Red Alert for Blue-Green Algae for parts of Copeton Dam. Click for more information.
COVID-19: Drive-through testing now available in Inverell. Appointments are to be booked in advance by phoning the Inverell clinic on 6721 9520. Click for more info.
ROAD WORKS: Warialda Road at Black Dam, 69km north of Warialda, commencing Monday, 22 June 2020 and continuing until Sunday, 4 October 2020.
WATER CONSERVATION TIP: Divert grey water from your washing machine for immediate use on your garden (except vegetables). Click for more info.
GET READY WEEKEND: Council is encouraging families, friends and neighbours to use the NSW RFS Get Ready Weekend (19-20 September) to prepare for bushfire season. Read more.
Listen

Buy From the Bush comes to Inverell

Local businesses are being urged to join a free workshop with founder of Buy From the Bush, Grace Brennan, to learn more about how Facebook and Instagram have transformed the fortunes of regional and rural businesses.

Buy From the Bush, an Australia-wide social media campaign to support business in drought-stricken areas, encourages people in metropolitan areas to support, and purchase from, rural and regional businesses.

The workshop on 25 August will be co-hosted by Buy From the Bush, Facebook Australia and Inverell Shire Council, and will be live streamed on the Council Facebook page at 1pm.

Since launching Buy From the Bush, Ms Brennan says she has been impressed with the amount of Inverell businesses who have been showcased on the platform and says Inverell is the ideal location for the first online session in New South Wales.

“Whether it’s the Instagram or Facebook platform, we’re calling on community groups and businesses to send their questions in.

“It may include topics such as hashtags, timing of posts, paid promotions or expanding your business’s market reach”.

Council mayor, Paul Harmon, says he’s thrilled to see Council join forces with Buy From the Bush and Facebook Australia and says it’s a coup to secure their services.

“I’m encouraging local businesses to tune in on 25 August and learn from the best in the world of social media.

Cr Harmon says the Buy From the Bush campaign has generated staggering results for rural and regional business since it launched in October 2019.

Questions for the workshop on 25 August can be emailed to council@inverell.nsw.gov.au; sent via SMS to 0448 012 939 or lodged via direct message at www.facebook.com/InverellCouncil 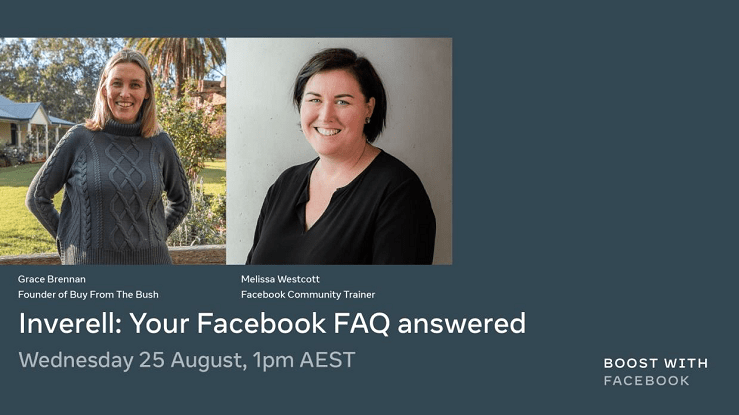 Image: Grace Brennan and Melissa Westcott will lead the Q&A session on 25 August.