Ashford pool is ready for summer

With summer ahead, Inverell Shire Council has installed a new shade shelter at Ashford’s public pool which will provide visitors a chance to be sun smart while taking a dip.

Measuring 12 x 20 metres, the colourful shade structure stretches over half of the main pool and mayor Paul Harmon said it has been installed with thanks to Federal Government drought recovery funding.

“We know how popular Ashford Pool is over summer and as the weather warms up, the shade sail will provide much-needed refuge from the sun and be more inviting for local families and visitors to use”.

The shelter is also expected to slow evaporation and minimise water loss.

With Ashford Pool set to open its gates in time for the October long weekend, Cr Harmon says the installation has been timed to coincide with the upcoming season launch.

“While the pool is closed for the winter break, it’s been an opportune time to undertake the improvements”.

Ashford Pool will open for the 2020-21 season from Thursday 1 October, with the pool to be open 1pm – 5pm during October and moving to longer operating hours in November.

New England Aquatics, which operates both Inverell and Ashford pools, has also announced learn to swim classes for ages 6 months – 3 years will commence in October at both venues.

Cr Harmon says the new shade sails project at Ashford pool is one of a series of improvements which are unfolding in rural villages over the next month.

“These projects are helping to revitalise our rural villages and smaller communities across the shire”.

“Over the coming weeks, we will be seeing a new boundary fence being installed at Yetman Sports Ground and Delungra Recreation Reserve will have their main arena re-surfaced for horse sports events”. 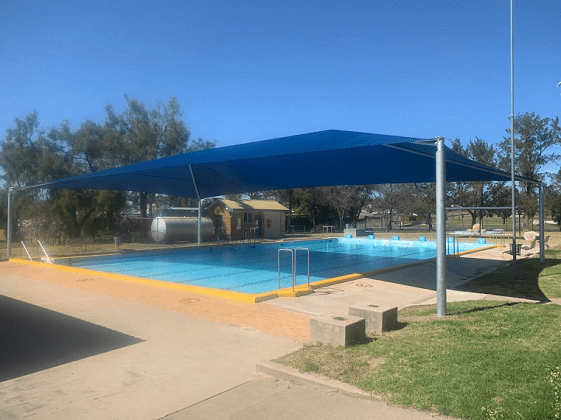 Image: The new shade shelter covers approximately half of the main pool